Blast injuries from terrorist bomb attacks can sometimes lead to

unique and unusual patterns of injuries. These injuries are even classified differently from military-type wounds encountered by soldiers on the battlefield. Bombs, especially improvised explosive devices created by terrorist groups, often inflict simultaneous internal and external bodily damage which can cause morbid life-threatening multiple system injuries and possibly even death.

Blast injuries are the result of quick and rapid succession of chemical conversion of various pressurized solid and liquid gasses that instantaneously compresses the surrounding atmospheric air which generates what is known as a pressure pulse which quickly spreads as a blast wave in all directions. The effects of the blast wave are several times much more intense in a confined space such as a building of a vehicle. If the blast on the other hand occurs on an open space, the blast wave will instantaneously dissipate.

Blast injury patterns are highly dependent on different variables such as the amount of explosives, environmental conditions/setting and the type of explosive device that was used. Blast injuries should always be suspected by health care responders no matter how far a victim was in the epicenter of the explosion.

The shock waves from an explosion adversely affect and damage tissues and organs in various different ways. The following are four mechanisms of impact:

Blast injuries that involve pregnant victims will need special consideration. Although direct injuries to the fetus is uncommon, but injuries to the placenta are highly probably that must be assessed and detected as promptly as possible. Moreover, pregnant women in their second and third trimester, involved in an explosion or bombing incident should immediately be admitted to the labor and delivery area for continuous evaluation and monitoring. 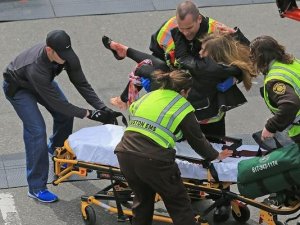 The elderly may also be at a higher risk of higher mortality and prolonged hospitalization following a bombing incident. As with most traumatic injuries in this category of injured victims, there is also a high risk of aggravating existing medical conditions as a result of a blast injury, or some may be masked by already existing conditions.

Majority of bombings occur in public and densely populated areas with a diverse population speaking multiple languages of different ethnicity and cultural groups. The language barrier may prove to be an unforeseeable obstacle health care responders will have to consider. Other similar obstacles in treating blast injuries include victims that are deaf, hard of hearing the mute similarly disabled victims.