Dementia is a group of symptoms that occur when the brain is affected by specific diseases and conditions that are characterized by memory loss and difficulties with thinking, problem solving and language. Dementia can be caused by diseases such as Alzheimer’s disease or by a series of strokes.

Dementia is an umbrella term and it describes the symptoms when your brain is affected by certain diseases and illnesses. Early stages of dementia include memory problems and difficulties in finding the right words. Memory problems may include forgetting your way back home from a grocery store, and/or being unable to remember the names of stores and places. You may also experience mood changes since parts of the brain that control your emotion may be affected by the illness. You may also have communication problems such as a decline in the ability to talk, read and write. 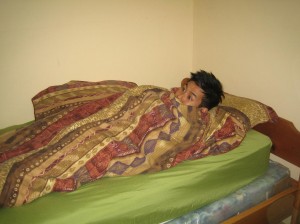 Difficulty in sleeping is common in dementia

Diagnosing dementia can be difficult, especially in the early stages. Your doctor will usually perform assessments that include physical examination, interview, brain scans and other laboratory works. A mini mental state examination is usually performed especially if you have complaints of memory loss.

If you have dementia, you may have a feeling of anxiety when it gets dark. It is called “sundowning.”  This usually gets worse and is associated with confusion, anxiety, agitation and insomnia. The following might help  in giving you a normal sleeping pattern:

Safety is an important issue for patients with dementia. The symptoms such as confusion, memory loss and disorientation are the factors that influence your safety when you have dementia. Having family and friends as well as constant communication with your health care team will help you overcome issues about your safety. Having them near or around you, especially healthcare professionals who know basic first aid, can help you prevent life threatening situations that might arise due to your condition.

Alzheimer’s Association.  What is Dementia? Retrieved on June 5 2014 from http://www.alz.org/what-is-dementia.asp